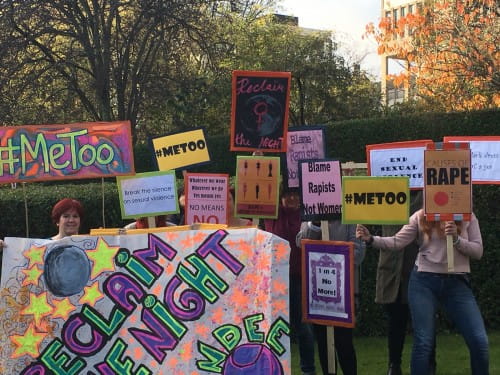 This year’s Reclaim the Night March takes place against a backdrop of an avalanche of disclosures about sexual violence, abuse and harassment from Hollywood to Holyrood. Millions of survivors used the #Metoo on social media to show solidarity with other survivors and also to raise awareness of just how prevalent an issue sexual violence and harassment is. Further, on Trans Day of Remembrance this month we were reminded of the extremely high levels of violence faced by the trans community and the urgent need for local services to support and stand with trans survivors.

Our city is not immune, in fact last year Dundee seen a 17% rise in the number of reported sexual crimes. Specialist services like the Women’s Rape and Sexual Abuse Centre in Dundee, and indeed other Rape Crisis centres across Scotland have also witnessed a sharp increase in the numbers of people coming forward looking for support.

This year’s march is being supported by all genders across and host of local organisations, including the Dundee City Council, Dundee Women’s Aid, Amina, students from both Dundee and Abertay Universities, and local trade unions.

Looking for a reason to come along to the march?

“Leave No One Behind: End Violence against Women and Girls"

Rape Crisis Scotland and WRASAC use 16 Days to highlight growing demand on centres
Our centres across Scotland are struggling to meet the growing demands for support due to a lack of funding, resulting in growing waiting lists and times. We will be highlighting the need for additional funding to enable us to support survivors when they need it rather than current ‘Post Code Lottery’ – depending on where you live you can be waiting anywhere from 48 hours to 10 months to be allocated a support worker – survivors of sexual violence deserve much better!

Here’s what one woman on our waiting list had to say:

“I’ve been on the waiting list for a support worker since June. Being left on the waiting list can make you feel like… well just that you are being left. I’m ‘lucky’ that I have an Advocacy Worker because I’ve reported to the police. She helps me with the case. But last week for example, I was a complete mess. I was able to contact the Advocacy Worker and she seen me in the office the next day. I left feeling much better.

But what about women who haven’t got an Advocacy Worker – who can they turn to? It’s just not right!"

“This is such an important event for Dundee. There is hardly a week goes by without a story about domestic or sexual violence in the Dundee press. Unfortunately it is still the case that the focus of attention tends to be on the behaviour and actions of women who have experienced sexual violence and harassment. This can lead to feelings of shame and also fear of coming forward to disclose their experiences. This march is about making a clear and firm statement that it is the predatory behaviours of some men that are to blame for sexual violence – not women. So join us in our message – ‘Whatever we wear, wherever we go, yes means yes and no means no!”

Statements of Support for Dundee’s Reclaim the Night March

“Dundee UCU aims to have reps there on the night. It is important for the branch to support initiatives in general and the wider community within which we work and live. Violence against women on university campuses is ever increasing and we support our student association’s zero tolerance campaign. All that we can do to support educating people around inappropriate behaviours, we will.”

“Abertay Students Association is proud to support the Reclaim the Night March on Thursday. It is important that we make a strong stance in opposition to the sexual violence that is sadly far too prevalent in our society. We need to make it clear that gender based violence needs to end and empower the voices of survivors as the drivers of social change”.

“We are encouraging our members to take part in the Reclaim the Night march. Events like this are important to show that there is still a lot to be done to tackle issues of gender inequality at work, but also to tackle violence against women. Recent months have shown that it is very important that sexual harassment at work remains a reality for far too many women in today’s workplaces. We are committed to challenging this whenever it raises its head.”

Browse our collection of stories, poems and experiences.