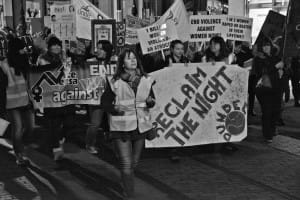 Come and join us for this year's Reclaim the Night march, which will take place on Thursday 30thNovember 2017. We will start the march at the Marryat Hall at 6pm and from there m

arch around the city centre.

Reclaim the Night marches are held all over the world and serve to both raise awareness of and demand an end to sexual violence. This year we are lucky enough that we will be joined by a variety of speakers, musicians and performers who will both inspire and entertain us, before we set off to march through the city.

The theme of this year’s event is ‘Leave No One Behind’ and so by marching together through the city we will spread the message that people of all genders, regardless of race, class, ability, immigration status or sexuality have the right to feel safe in public spaces and in our communities more generally. Reclaim the Night comprises a key part of Dundee’s participation in 16 Days of Action, a global campaign which seeks to create positive social change by eradicating gender based violence.

We’d really love to have your voice represented there. Might you have someone/a group involved in your organisation who might like to speak/perform at the event? Most of all, it would be great to have your support and to have you march with us to end sexual violence. Please do come along with placards and banners aplenty! Given that we aim to make this event as inclusive, accessible and as representative of our community as possible, we particularly welcome banners and placards written in languages other than English.

We support survivors of all genders aged 11 to 18.