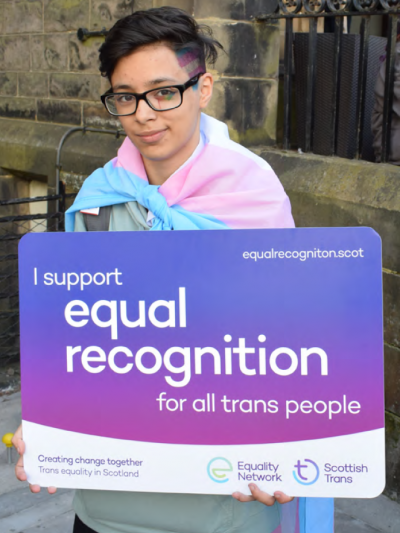 WRASAC fully supports the proposals to change the Gender Recognition Act 2004 to enable trans people aged 16 and over to obtain legal gender recognition on a self-declaration basis. These changes have the capacity to significantly improve the lives and rights of trans people, something WRASAC wholeheartedly advocates. Below we explain what the Equal Recognition Campaign is, and why we as a feminist organisation fully support it.

What is the Equal Recognition Campaign?

The Scottish Government is currently considering amending the Gender Recognition Act 2004. The Equal Recognition Campaign, created by the Scottish Trans Alliance and Equality Network, is encouraging as many individuals and organisations as possible to respond the consultation and to express their support for the proposed amendments.

Under current legislation, in order for someone to change the gender on their birth certificate, they must provide a detailed psychiatric report and other evidence in order to prove to a panel of strangers that they have been living in their ‘acquired’ gender for at least two years. The panel then has the power to decide if that person can legally change their gender.

The Scottish Government is considering moving to a system of self-declaration, which would remove the psychiatric diagnosis requirement and allow individuals to legally change their gender simply by signing a self-declaration application form. Additionally, the Scottish Government is considering lowering the age limit from 18 years old, to allow 16 and 17 year olds to legally change their gender too.

At the Women’s Rape and Sexual Abuse Centre, we offer support to our service users on a self-declaration basis. We always have done and we always will do. The Scottish Government’s proposal to adopt a self-declaration system for legal gender recognition would therefore not have any impact on who accesses our services. We encourage the Scottish Government to operate on this basis too as it is integral to transgender and non-binary people’s rights to autonomy, dignity and privacy. These rights are at the core of our ethos and values as a feminist organisation and so we fully support this proposed change to legislation and would advocate that it is extended to include provision for non-binary people too.

Further, WRASAC feels strongly that the current procedure and evidence requirements to obtain a Gender Recognition Certificate are in conflict with our feminist values. They are discriminatory, humiliating and afford institutions the power to assess and police gender, thus stigmatising trans people further and reinforcing the gender binary which WRASAC work to dismantle.

We are aware that there is discourse which suggests that a system of self-declaration would be a threat to women’s safe spaces. This is not our viewpoint. We want to emphasise that we already welcome self-identifying trans women into our safe spaces, that their inclusion does not in any way determine the safety of that space and that to suggest otherwise would be a disservice not only to our trans service users, but to the trans women working within our sector creating those safe spaces every day.

We agree with this proposal as 16 and 17 year olds have full legal capacity in other aspects of life, including being able to marry and vote. Just as they are able to make serious decisions about marriage and voting, they should be able to decide for themselves if they want to obtain legal gender recognition. Further, as part of our feminist analysis of inequality, we believe that children and young people experience abuse due to their position in society and therefore welcome legislative change which improves young people’s rights. Our children and young people’s support service strongly values listening to young people, believing them and allowing young people to have a voice in what is right for them. The proposal to allow 16 and 17 year olds to apply for legal gender recognition is therefore in line with these core values and we fully support it.